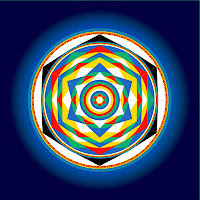 In the Dzogchen teaching Vajra means our real nature, the true condition of all
phenomena. The Vajra Dance is an important method which uses sound and movement
for integrating the three aspects of our existence – body, energy and mind – in that
knowledge.
The Vajra Dance is also a very special and effective practice for restoring the natural
condition of our energy and harmonizing our whole being. As such it can be approached,
with due awareness and respect, by all people who are sincerely interested in it and wish
to receive its benefits.
In the Dance of the Six Spaces of Samantabhadra twelve practitioners, six females
and six males, dance together on a large Mandala of five colors which represents the
correspondence between the internal dimension of the individual and the outer dimension
of the world. They are accompanied by music and the chanted melody of the Mantra of
the Six Spaces of Samantabhadra (the primordial Buddha, symbol of our real nature).
In 2011 the Dance of Vajra has been recognized by UNESCO as humanity wordly
heritage.
Please join us in the opportunity to learn and practice The Vajra Dance at the beautiful
retreat land of Tsegyalgar West, Baja Ca Sur. Please contact us for more information: tsegyalgarwestsecretary@gmail.com

Posted by Bay Laurel Studios at 8:57 PM No comments: