Please join us for some or all of these events! 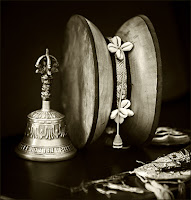 “Guru Yoga” awareness of our real condition as it is
the principal practice of the Dzogchen Teaching.
In the retreat we will combine the explanation
and practice of Guru Yoga of Garab Dorje and the
Chod as used in the Dzogchen Community. Chod is the
practice of cutting through to our primordial state.
Afternoon time for rest or Vajra Dance practice

Nina Robinson was born in England in February 1937.
She met Chögyal Namkhai Norbu in 1980 in Italy. She moved
to Italy in 1986 and worked at Merigar for seven years.
In 2002 Rinpoche asked Nina to teach
Since then she has been invited to many parts of the world.